After 9 years of going to birthday parties and having hosted them, children know exactly what they want at this point, so consult with your child about what party theme they would like and what they would like to do. As they get older, they begin to feel very grown up about parties. They like to show off and compete and have a desire to win in games that involve active participation.

Invite schoolmates and friends. Some children prefer to only have children of their own sex at their party. Since as they get older, children typically tend to have one intimate group of friends, the guest list might not even be that large. And parents need not be at the party.

Girly things such as spa, manicure, dress-up for girls parties are great since the girls love to feel grown up at this age. You don’t even have to hire a professional, buy a couple of nail polishes, mud masks, and clean out your closet full of old clothes you don’t even wear and tell them it’s vintage clothing. They’ll have a blast trying things on!

For boy parties, physical activities, including attending a sporting event with friends are great. Create your own little league in the back yard, or make dad take the boys to a basketball game.

Good music, fun pickup foods and a DJ Emcee helps to insure the success of a party at this age. Dance games with lots of prizes help to keep the dance floor filled. A strolling entertainer, such as a sleight of hand magician, works well to entertain those kids that shy away from the dance floor. 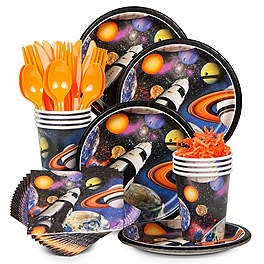 Your child captains the spaceship in this cosmic adventure as head astronaut.

Create an atmosphere that’s out of this world with glow-in-the-dark stars and planets. Use this great space wall mural or DIY it and cut rockets and moons out of tin foil and hang them on party room walls. 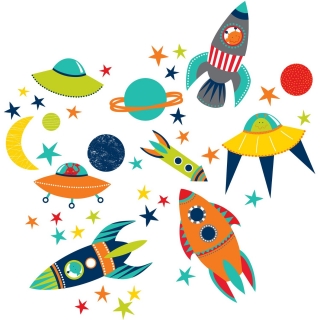 and  planet mobiles from the ceiling, or if you don’t want to purchase a planet mobile, why not create one out of regular balloons that you can paint after inflated.

Outer space might be almost ordinary if not for its extra-terrestrial residents. Invite party guests to create their own alien costumes out of everyday items turned extraordinary. Set up a workshop with materials such as pipe cleaners, goggles, empty boxes, etc. The guests will be entertained for hours and will all come out with unique creative creations.

Hand each guest a plain white paper plate and markers, and have them create their own planets. Then as a group create your very own solar system!

Take this time to teach children about the different planets. We like to read this Dr Seuss: There’s No Place Like Space Book. It does a wonderful job at conveying the most important aspects of each planet to little ones. 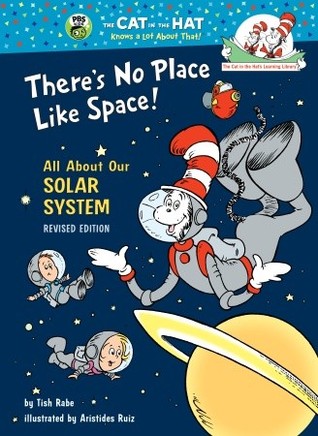 An inflatable moon walk will give your space cowboys a chance to practice navigating zero gravity. Rent one from an inflatable bouncy supplier and make sure an adult is always present and supervising the fun.

Let your little moonwalkers rock out to an intergalactic mix of chart toppers and movie soundtracks like those from 2001 Space Odyssey, Star Trek, and Star Wars.

Visit the camping section of your local sporting goods store and pick-up as many different kinds of freeze-dried foods as you can find. Your young astronauts will love comparing the space-age taste of treats like astronaut ice cream to the earthly version. Do have the regular non-dried foods also since not many children are such adventurous eaters. Serve them little space themed sandwiches such as moons sandwiches and rocket skewers inside their very own insulated sandwich bag that doubles as a favor. 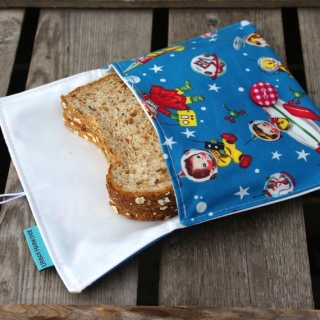 Lay out these cool Decorate Your Own Placemats  that come in a robot space theme and let the kids play while they eat or wait for their food.

Stage a countdown just like one of NASA’s shuttle launches. Instead of engines flaring at 3-2-1 though, blast off with the lighting of the birthday cake candles.

Send each space adventurer home with a package of glow-in-the-dark stars for his bedroom ceiling. This way, every night sleep will inspire a trip to another galaxy.

Add a few other items such as space stickers, pencils, bounce balls, etc.

Color Your Own Spaceship

We haven’t forgotten the Star Wars fans out there. There is a lot of themed items that would make the space party more Star Wars-y. Just incorporate some more ideas from the movie such as calling the food table, the Cantina table. Play Star Wars Trivia and hand out light sabers as favors.