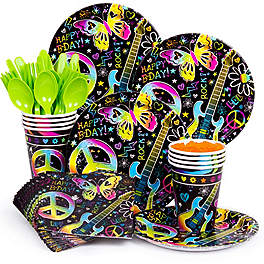 The ‘dark’ is really key in this party! The room must be dark, but still well lit enough that it will be safe for guests to roam around.

There was a time when people would make fun of raves and the people that would throw around glow sticks. Well the truth is, it is a real talent and the light show that you get is spectacular, like fireworks without the loud boom. Hire a talented raver and have them perform for the guests. If you can, ask him to teach the guests a few tricks so that they can really get a spectacular light show going.

Music is always a great addition to this party theme so a DJ would be a great complement. 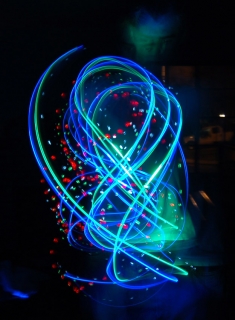 Until  someone invents  glow in the dark food, we will have to settle for a more traditional approach to this party’s menu, but you can accent your food by using glow in the dark or neon Tableware

; that will look as if it were glowing when under a black light. Also, choose foods that are white and they will look glowing under the black light 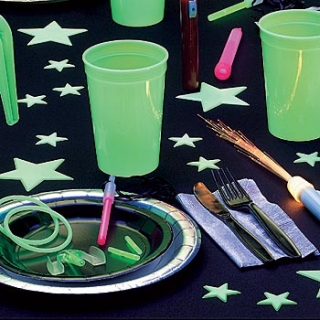 that can only be seen with a black light

, that just makes it more exciting! Have your party guests chase down the Glow In The Dark Bouncing Balls

scattered throughout the room. How may can they catch before they bounce away? Use them in a game or give them away as favors.

Or how about paint ball. There are many paintball locations that have the glow in the dark option. This is a great addition to the party and it will keep kids busy and entertained for a long time!

Black lights are almost crucial in this party to make that glowing effect. If you don’t use black lights then hang a lot of colorful Glow Sticks

light up balloons around the room.  Have your guests wear white t-shirts so that the white will glow under the lighting. Glow In The Dark Stars

or shapes are also great for this party, just make sure you turn the lights on for a long time right before the party starts so that the fluorescence lasts longer.

Glow in the Dark Putty Eggs.

For girls do Mini Glow in the Dark Lipgloss