A birthday boy’s love of Disney planes inspired a flying party of delights this past weekend! A stunning event space was filled with Planes décor reminiscent of a summer sky, a much needed escape from January in NYC. 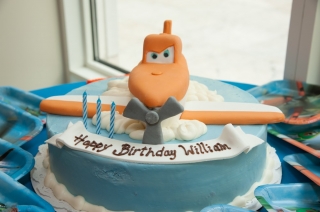 Guests arrived into an airy party room adorned with larger than life balloon trees in the theme colors of sky blue, orange and white. Major Mike the Juggling airplane pilot strolled the room and a balloon artist twisted up fancy hats and accessories- soon the room was a sea of colorful balloons! 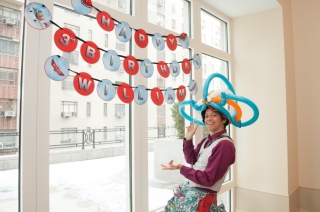 Linda Kaye’s Partyhelpers played games with the children at William’s Runway, a custom play table named in honor of the birthday boy piled high with Disney Plane’s Lego sets. The kids tested out their favorite planes and later on, they received their own set to take home as a favor! Once all the guests had arrived, a four piece children’s band took the stage with a playful set of interactive songs. Kids (and parents!) were dancing and singing along with shakers and props! When the band had sung their last tune, the party was ushered to the theater room for another surprise… a juggling act with Major Mike 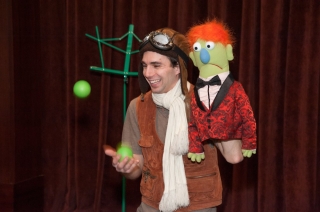 Mike lead the kids on a make believe flight from take-off to landing while juggling balls, hoops and even a tennis racquet! When Mike took his final bow, the party made their way back to the party room where everyone sang a rousing “Happy Birthday” to William and he made a wish on his Dusty Crophopper custom cake. What more could a boy ask for? 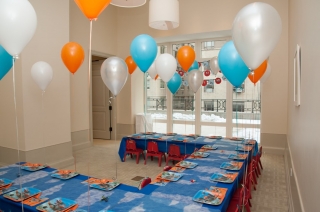 Kids took a seat at the birthday table for pizza and juice and the grown-ups enjoyed a light lunch of mini-sandwiches, quinoa salad and quiche with assorted beverages. When the cake had been devoured and the birthday family thanked for a lovely party, the guests made their way out into the city, kids with their favor bags and full bellies! Sometimes for party inspiration all you have to do is look to the sky!

My son would love a party like this. Next month will be his third birthday, so I am looking for ideas. I am in love with the airplane cake!